Please, think of the children (and AOL)

I’ve been very on the fence about net neutrality for a while now, but I think I’m ending up on the “must have” side of things. I think I’m falling into that category because it is what makes the Internet great.

I recently read about a guy’s experience trying to remove himself – completely – from facebook. That was the boring part, instead the interesting part is why he wanted to do it. I’ve seen the motivation hinted at a few times here and there, and small ruminations of it coming back up. 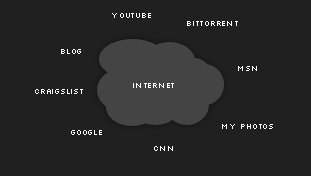 In this world of Web 2.0 and large community “social networking” sites, it has become a very ‘in-thing’ to entrust your network, your photos, your stories, your communications, your e-life and large portions of your real life to these ginourmous, usually faceless entities. And they make it so easy: They’re slick, they work, they’re fast and fluid and they enable you to share with all your friends when you or they aren’t tech savvy enough to setup your own websites with interlocking RSS feeds. However, this is not what the Internet is. This isn’t what it was meant to be. The Internet is the end points, not the singular.

The greatest thing about the Internet is that you can hook a computer in and create your own territory. You needn’t claim a piece of the pie, you can just bring your own picnic basket (and retain ownership and copyright of your food stuffs, to extend a metaphor too far.) The Internet grows outwards, not by grouping around a few single points. But that’s what happens with social networks – you totally integrate there. We’re losing what the Internet is about by falling under one site or another’s corporate, lawyered, and TOS’ed umbrella. You don’t have freedom of speech there. You can’t say what you want. Shoot, most of these places you give up exclusive republishing rights to your content for just about anything the host company wants.

This centralized system is the anti-Internet. AOL is no better than what Facebook or MySpace strive to be – the all-and-everything Internet stop for your browser. The real question is thus, how do you keep the heart of the internet beating, while still allowing people to congregate in ways that social networking sites so well facilitate – or is having 500 friends really just superficial fluff?

While this decision has been brewing for a while, what really drew me to it today was an article about a senator from Alaska saying we should install Internet filters to protect the children.

Always with the damn children…

Not only that, but if you think this is just something light and fluffy to argue about, check out this article on Ars about the companies selling DPI (Deep Packet Inspection) devices today, and exactly how this plays into net neutrality.