In one of my projects I need to create and use several fairly large, non-changing data structures – hash tables of string values, array’s of objects, nested object definitions several layers deep, etc. For example, from my battlefield 2 stats website I have several very large arrays that describe every award you can get, which look something like this, but repeated hundrededs of times:

So the question arises, how do you store this data, load it, and use it?

Of course, I found a page on StackOverflow about php storage. Perusing the article, you’ll see most people break down the caching theory into three options:

One responder (who should have more votes, if it was up to me) went pretty far and did a serious amount of benchmarking for the php array storage issue.

I won’t go into a lot of details on each method as the linked articles cover them each pretty well, but I want to open two other options and redo the benchmarks because something smelled fishy when JSON has been coming out the winner…

JSON certainly has some advantages: the cached file sizes are smaller (especially when you saving a numericly indexed array), it is usually faster to write, and if you have a highly JS oriented site architecture being able to make HTTP requests for your JSON data files can be quite useful.

What irked me is that, for my purposes, none of those things really truly matter. File size isn’t a real concern because my largest cached file weighs in at about 50KB. I won’t be distributing the data to JS applications, and writes only happens once.

So, what does matter? Read speed. And with that in mind, what I found out is that JSON can’t hold a candle to the other two methods.

I find it odd that the opcode cache was so readily dismissed; it’s a surefire way to speed up ANY of these operations. To that point, let’s introduce two other caching methods that an that can make unserialize and json_decode even faster. How? Just wrap the data up inside a PHP file!

The same treatement can be applied to unserialize. By introducing this boiler plate routine into your serialized/json_encode’ed data you can take advantage of the opcode cache. When you’ll see later is that even if you decide to go with JSON, doing this will lead to a significant speed up.

Here you will find the test script for benchmarking php caching with json, serialize, and var_export. A quick overview of how this is intended to be used:

The data generated by this script is fairly comprehesive. It will test arrays of strings, ints, and objects. The arrays are indexed by numeric and string keys. Additionally, it will test two object collections. In all cases, the script creates a Large, Medium, and Small set of data based on the $setsize value (100% size, 50% and 10%).

When you are running the test, I highly recommend you run with the same $setsize and $itterations value with APC off, APC enabled (apc.stat=1), and finally APC enabled(apc.stat=0) restarting your webserver between each execution. apc.stat instructs APC to check the file for modifications to see if it should be recompiled before using the opcache variant. Turning this off eeks a bit of performance out of APC at the cost of needing to manually clear the APC cache if you update files. The testing, however, shows that you may or may not think this is valuable — the performance difference is very, very minimal.

Also, for the APC enabled test runs, perform each run twice to ensure that your APC cache is primed.

Here’s a graph comparing the best runs of each decoding situation: 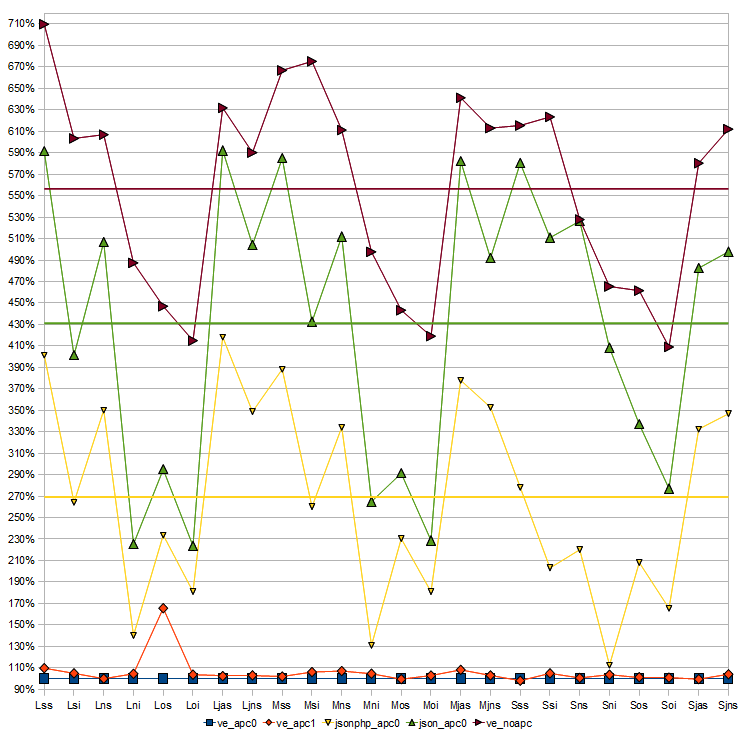 And an ODS (Open Office Calc) file of the raw results and a few other graphs.

What you are looking at here is the decoding of each type of data structure by method, as compared to the fastest method, which is var_export with APC.

If you have any suggestions, feedback, or wish to contest the results, feel free to get in touch or submit a patch.

[^1] If you have a small enough data cache, you should be reading up on Redis, and this whole discussion becomes pointless very quickly.